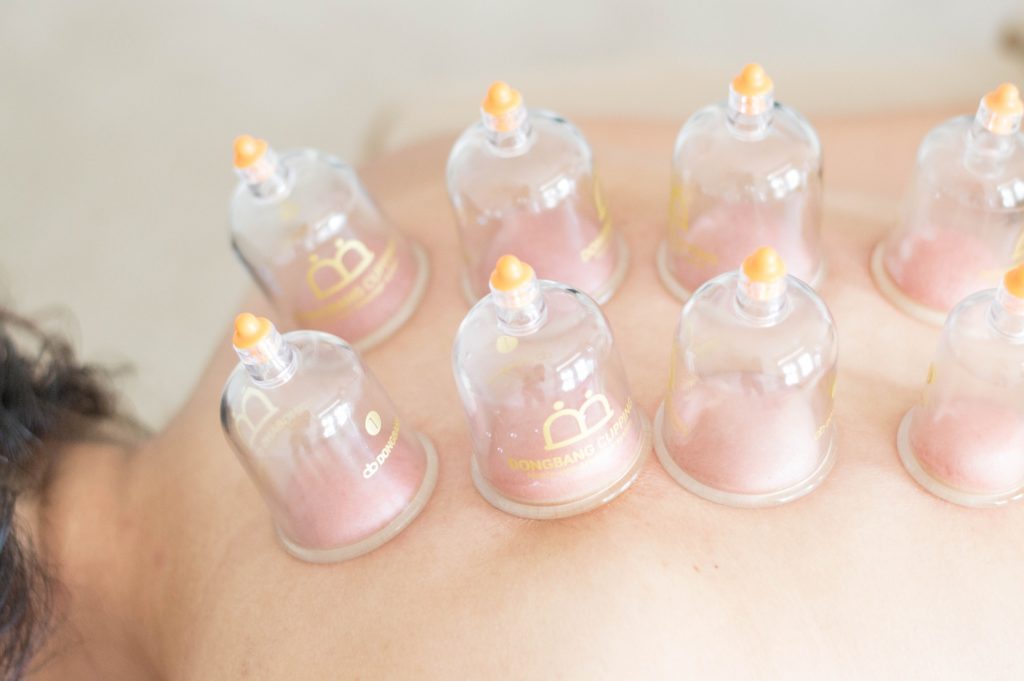 Chinese medicine has been around for thousands of years and cupping therapy is one of its oldest and most effective methods. Records of its use in the China go back 3000 years, but it has also been traditionally practiced in many different cultures around the world. There is evidence that it was practised in Ancient Egyptian, Unani, Korean, Tibetan, and Latin American cultures. In North Africa, cupping therapy was first documented on Eber’s papyrus (1550 BCE), where a cup was placed on the skin to treat malaria. Cupping therapy was also mentioned in the Chinese medical text The Yellow Emperor’s Classic of Internal Medicine (500 BCE).

Cupping therapy, also known as vacuum cupping, hijama cupping, or horn treatment, is a practice in which the therapist puts cups on the skin and creates suction within it so it attaches to the body. This causes the tissue beneath the cup to be drawn up into it, causing an increase in blood flow to the affected area. As well as releasing muscles and easing pain, this enhances blood flow under the cups and draws impurities and toxins away from the nearby tissues and organs towards the surface for elimination. Cupping therapy can be used for a variety of purposes, including pain relief, detoxification, and overall healing and wellbeing. It is often used in conjunction with acupuncture.

Chris chooses the size, type and number of cups based on his patient’s needs. Modern cups are usually made of glass or plastic, but historically they have also been made of bamboo, ceramic, metal or plastic.

Chris uses cupping extensively in both his Collingwood and Meaford clinics. He mainly uses two techniques, depending on what his patient is presenting with.

The first type of cupping he uses often is called dry cupping. The most common indications for this are muscular tension, tightness or pain, either caused by overuse, stress or habitual tension. Think of how your shoulders feel after a stressful day in front of the computer – congested, tight sore, painful. This is a perfect example of when dry cupping is very useful. People report both the release of the tight areas as well as deep relaxation following cupping treatment.

Chris often follows cupping with acupuncture, as it makes the needles more effective by opening up and loosening tight muscles and fascia. This allows the energy to flow more freely, which is the name of the game in having and maintaining a balanced body and mind. That being said, cupping can also be used as a standalone therapy.

The second type of cupping that Chris often uses is called wet cupping. In this technique, he will pierce the skin before placing the cup on the area. This will draw a drop or two of blood into the cup (Chris only uses disposable cups for this technique) and is exceptionally good at relieving chronic pain in areas such as the neck, knees or lower back. It is also very good at lowering blood pressure and relieving headaches.

Cupping is indicated for both health maintenance and as treatment for specific diseases. In addition to the musculoskeletal pain conditions mentioned above, many systemic illnesses see benefits from cupping therapy, including rheumatoid arthritis, diabetes, mental disorders and heart disease. It can also be used to treat skin issues as well as respiratory, digestive and reproductive conditions.

Cupping has been gaining appreciation in Canada in recent years. Chris can attest that it is a modality that people love and come back for again and again. If you would like to see what cupping has to offer you, please don’t hesitate to come into either his Collingwood or Meaford clinics to experience it yourself.